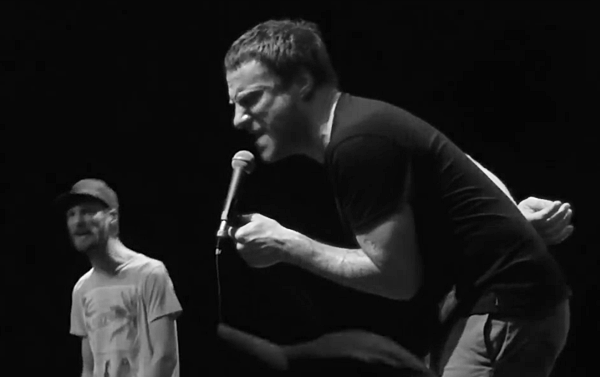 Well this feels a bit different. Two weeks ago I was watching Sleaford Mods play to a lucky few in Banksy’s Dismaland and yet tonight I’m pushing my way through crowds of fans in Kentish Town standing outside pubs breaking into chants of “Sleaford Mods”. How will something so minimalist that works so well for 200 people translate to 2000 people?

Inside the venue Yorkshire eccentric Mark Wynn is taking to the stage. With a chair, a box, a laptop and a tiara he walks on to a sea of mild indifference, Ten minutes later its a different story as the front begins to fill up captivated by his off the wall observations, frankly ridiculous rock’n’roll parody dancing and strutting and a decent line in songs about the lady in Age Concern -“This ones called ‘She Fancies Me That One In Age Concern’. It’s about how she fancies me, that one in Age Concern”. Madcap half hour yes, but very, very entertaining. Even the bouncers are laughing.

Steve Ignorant’s Slice of Life ensemble look frankly overstaffed compared to the other acts on show tonight with a guitarist, bassist and piano player joining him on stage to provide the melodic backing to his frequently heartfelt and forcefully articulated observations. Older, wiser but no less concerned about the state of the world Ignorant is much more confident tonight than when I last saw his band in Kingston’s Fighting Cocks venue. There’s proper anger here coupled with humour and a little self deprecation. The years in Crass have been completely left behind now and his brave experiment in working with a new collection of musicians seems to be working out. Decent but not yet essential. Sleaford Mods arrive on stage carrying all their gear with them. That, in effect, is some of the rider (water for vocalist Jason Williamson and beer for beats creator Andrew Fearn), a rucksack containing a laptop, power lead and audio cable and…well that’s it really until their nod to a stage set – an electric fan called Darren makes an appearance midway. How the hell is this supposed to keep a couple of thousand people entertained for the next hour? The band launch into the title track of their recently released ‘Key Markets’ album and it all becomes obvious. We’re transfixed by the sight of Andrew gently rocking back and forth to the beats, checking his phone and swigging from a bottle while Jason … well he just completely captivates in a manner so rare that all doubts about whether tonight would work get destroyed by the time the second song starts. There’s real anthems here. ‘Jobseeker’ and ‘Jolly Fucker’ see the bouncers dealing with crowd surfing whilst slower numbers like recent plodding single ‘Tarantula Deadly Cargo’ show the variety on offer. Sleaford Mods have ingredient X in bucket loads and they’re only just realising it. This gig feels like a watershed moment for them. Years of getting nowhere and then they’re headlining the Forum as part of a nationwide tour. They know things are changing but they’re wise enough to know it can all evaporate as quickly. So when Jason screams “We fucking love you Forum” it sounds genuine despite his frequent references to this all being a job. And in set closer ‘Tweet, Tweet, Tweet’ we finally hear him singing – he nails his lines perfectly before exiting the stage. Sleaford Mods had conquered the Forum. So with their job done, whats next?

Watch Sleaford Mods ‘Tied Up In Nottz’ at the Forum