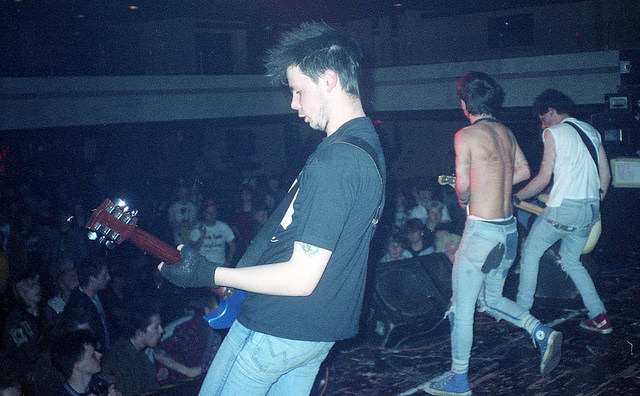 Sad to hear that Dickie Hammond, guitarist with HDQ, Leatherface, The Jones and many other bands recently passed away. My condolences go out to his friends and family.

HDQ first came to my attention with their self titled 12″ on Endangered Musik. I contacted the band at the time for an interview for my zine Crisispoint and we set up a gig at the Wlilliam Morris club in Wimbledon London. It was the first time I’d booked a band from out of town. The story of that night is told in their liner notes on their Boss Tuneage re-release of their ‘You Suck’ album. I remember Golly and Dickie staying round my mate Lee’s house (RIP Wombat) and they were such good company. From there I booked the band again for a gig at the Robey with The Instigators and Oi Polloi, another great night and asked them to appear on the EP that came out with Crisispoint and Polka Slam zines joint issue. They had a unique sound in the UK at this time, Hammonds guitar wizardry really set the band apart with fast intricate picking and an eye for more melodic tunes than most – check Grey World on ‘You Suck’ as an example. They were pushing boundaries and continued to do so through their other albums ‘Sinking’ and ‘Soul Finder’ before splitting. Dickie went on to play a key role in Leatherface and many other bands but for me it was his work in The Jones that recaptured that HDQ spirit. I was lucky enough to see a reformed HDQ play in Camden last year too and he was once again on fine form.

It’s a line from The Jones song ‘Wilton Road’ that makes me remember him today – “Im not here to make up numbers”. He most certainly wasn’t. He had an influence on many, many people and has left behind a great body of work that will ensure he continues to do so. R.I.P. Dickie Hammond.

Dickie Hammond with HDQ at a Birmingham all dayer.

Check these releases out for an appreciation on how Hammond moved UK hardcore and punk through to a more melodic and progressive sound.