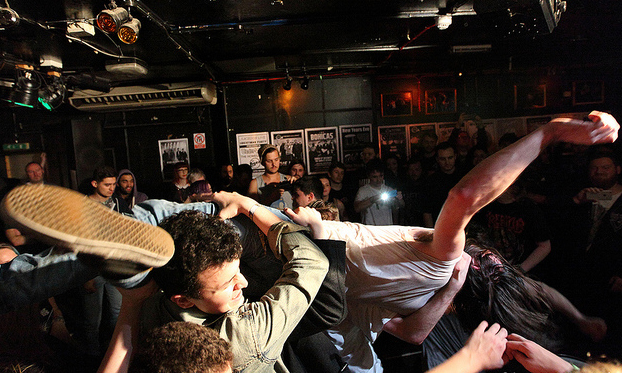 I caught Heck earlier in the year, back when they were called Baby Godzilla and before the legal overtures that made them change their name to their current moniker.  Part of what I liked about them, asides from their chaotic but committed performance was the fact that when they finished I didn’t actually have much idea what I’d just witnessed. So a return visit was on the cards and with London swiftly sold out a jaunt to St Albans was my next best bet. Thecityisours at The Horn, St Albans

The Horn is a decent venue, set up nicely at the back of the pub but putting on gigs consistently enough to have its own PA and lights. TheCityIsOurs are taking the stage as I walk in  and kick off as they mean to go on. Machine gun drum beats, vocals that alternate between the tuneful to screams of rage while the music starts, stops and starts again constantly keeping you on your toes as to just where its headed next. The band sound destined for bigger venues but its a long slog out of here. Still they seem to be enjoying the ride and get the crowd on side. Up and at ’em – Polt Her Geist Polt Her Geist – caught in a mosh

Polt Her Geist set up on stage with a TV displaying static stage centre. It’s removed without explanation just as the burgundy clad band take to the boards and start up. In many ways they are similar to the opening act, stop start rhythms, complicated timing sequences, screamed vocals but they also have enough of their own style. With a singer not afraid of going berserk and a rock solid drumbeat the guitarist and bassist thrash out an at times discordant sound. Yet put it all together and it works. A bit of a theme for tonight. When the singer finishes one song crouched on the floor rocking backwards and forwards and repeating one line again and again its done with the kind of attitude and abandonment thats hard to fake. An unusual shot of Heck, chiefly because it includes all four members roughly in the same space – a pretty uncommon experience as the night would prove.

Heck have a couple of tough acts to follow then – not that it phases them in the least. They start things off with a true cacophony of sound. Mike stands, guitars, even guitarists are all launched into the crowd. It’s instant chaos that only notches up the gears as the band truly hit their stride as second song ‘A Great Idea Bastardised’ arrives. Arms are flailing everywhere, crowds are split and then slam back into each other yet somewhere in the middle of it all are two whirlwinds on the guitar climbing and leaping off everything. Including me at one point as when the singer got bored of playing on top of the bar counter he just put his foot on my shoulder and used it to propel himself forwards back into the crowd. Gear gets left all over the shop – a guitar is just thrust into the arms of a kid who looks astonished to suddenly be part of the band whilst its owner is hoisted above heads by the crowd. Elsewhere parts of the drum kit end up on the dancefloor and another member of the audience is left looking after the mic for long sections of the set. How do they manage to keep it altogether and get through their songs? I can’t tell you but drums and bass keep it moving along and there’s usually at least one of the guitars going. Technical or musical perfection it may not be but entertainment wise its off the scale. Heck take the frenzy that most bands reserve for their final song but apply it to their entire gig. Music as an experience – and no I still don’t have much idea of what I have witnessed by the end – but it sure was fun! Heck, lit by halogen lamps they’d set up themselves. A band whose amps are stuck on notch 11. Cheers Heck!