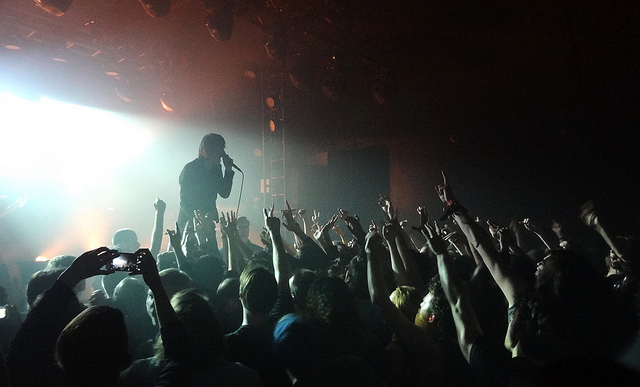 Milk Teeth, odd name for a band. There must be a story in there somewhere. I’ve not come across them before but tonight they are playing the biggest gig of their career supporting Los Angeles rock trio Failure and Swedish hardcore punk legends Refused. When they arrive on stage its still quiet in the venue but they instantly hit their stride. Plenty of movement, especially from singer guitarist Josh who spins, jumps, twists and constantly uses the top of the bass drum as a platform for playing and leaping off. Elsewhere bassist Becky provides a thunderous noise as well as lead vocals whilst Chris and Olly provide guitar and drums respectively. Together they kick up a real grungy storm full of hooks and passion. The band are at something of a crossroads right now, playing some of their older songs for the last time before they get dropped to highlight material from their forthcoming ‘Vile Child’ album (29th January 2016, Hopeless Records). Failure occupy the middle slot and seem to have an inordinate amount of equipment for a three piece. Maybe too much for me as they seem rooted to the spot for their entire set. Luckily they have a catalogue of mid paced strong songs with the occasional thrash out. Driven by rock solid drumming and a heavy bass sound they go down well with the crowd but all the same things aren’t really moving down the front. Maybe a large section of the audience is as unfamiliar with their work as me. They may not have connected on the night but a post gig trawl around youtube reveals them as an act worthy of further investigation. I’m left with the impression that I would have enjoyed them a lot more had I been familiar with their songs. My bad. Refused, however,  are on another level when it comes to stagecraft and entertainment value. The hardcore punk tag they have is a long way away from Sick Of It All let alone The Exploited. Visually they are more like fellow compatriots The Hives but that’s an all too cheap and easy comparison. Singer Dennis Lyxzen is rock’n’roll personified, spinning on the spot, outstretching his arms and throwing and catching his microphone like its on elastic. Dual guitars clash and combine perfectly creating razor sharp riffs and the floor of the Electric Ballroom is bouncing from one side to the other right from the start. Politically Refused have a left of centre bias, it comes across most markedly in well received in-between songs speeches about the Paris attacks, climate change (“There’s no green capitalism” Dennis cries before launching into ‘Servants of Death’) and the taking in of refugees from Syria. There’s some real standout tracks in amongst a consistently strong set that ignores a lot of their earlier more thrashy output. Highlight has to be ‘New Noise’ with its tense build up for the first minute before it explodes into life but for many it’s on a par with the semi radio friendly ‘Liberation Frequency’ – all  quiet stripped down catchy choruses interrupted  with full throttle guitar / screams. Refused tonight are in a class of their own, there’s a lot of happy people at the end as the band bow together and leave the stage (I’m really not used to that!). Got to say that I’m one of them.