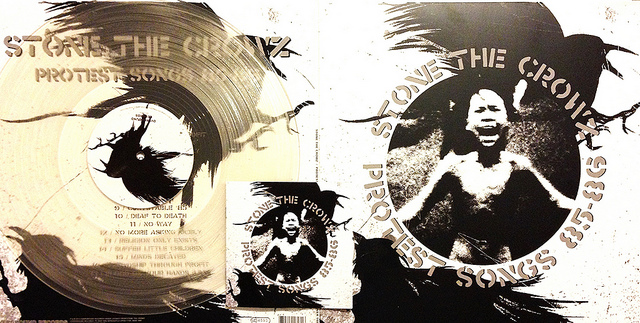 Stone The Crowz vocalist Trevor Speed asks at the beginning of ‘Suffer Little Children’ “Sometimes when I’m alone I think I’m the only who thinks this way. Well am I?”. Back in 85/86 when these songs were recorded he was far from alone in his thoughts. Anarcho punk – a fusion of ideas, music, direct action, art and yes, even an anti fashion fashion, was still captivating large swathes of angry and disaffected people both in the UK and abroad. Stone The Crowz arrived when the movement was already on the wane from it’s peak during 1980 to ’84 but its end was never really fully realised and its influence and ideas are still very much with us today. As a result of arriving somewhat late they missed out on a proper dedicated release and instead only appeared on their own demo tapes along with with several tracks on compilations. This beautifully simple package gives them the outing they deserve: a Crass influenced identikit sleeve complete with black line drawings, clear vinyl LP, a CD with all the lyrics reproduced along with band photos and C60 cassette covers.

The first five songs on the record sound wonderfully fresh even after 30 years. They stand up well against the bands that influenced them. Vocally they remind me of Exitstance and musically there are nods to Flux of Pink Indians and Icons of Filth. That’s no bad thing, these were all amongst the best the movement had to offer. Lyrically its standard fare for the time. Killing animals is wrong, religion is wrong and the Police are…well, if you’re reading this you no doubt already know the score. From track 6 onwards the sounds not so clear but still good for the time and you get a sense in amongst all the songs that are on offer here that if the Mortarhate or Crass labels had put out a full release by the band it would have been a stone cold classic of the genre. Stone The Crowz capture the sound of pure rage against the injustice of it all. Guitars are abrasive and urgent, drumming is driving and solid and just as importantly – completely lacking of some of the biscuit tin plodding of other bands of the time. So thirty years on the band get the release they warranted and it turns out its just great – and its not as if the problems discussed here have gone away. Trevor Speed is still far from alone….