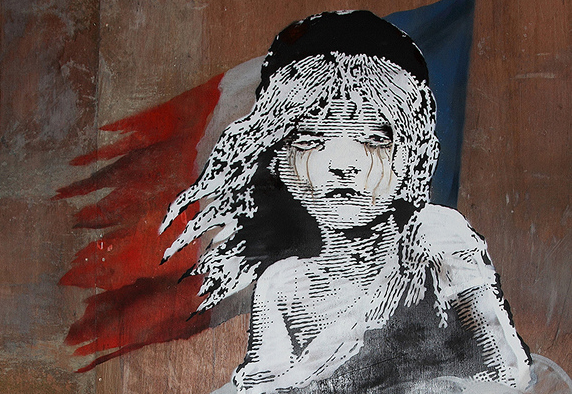 A new and confirmed work by Banksy appeared in Knightsbridge, London on Sunday 24th January. Directly opposite the French Embassy it depicts an image made famous by the film and play Les Miserables of a young girl, this time with tears streaming down her face. On the ground by her a can of CS Gas spews out its contents. The location of this piece is no accident. The French authorities have recently denied using CS gas to clear sections of the Calais ‘Jungle’ camp. Banksy’s piece includes a QR code with a link to a video from Calais Migrant Solidarity from the 5th and 6th of January 2016 which seems to clearly show that this claim hides the truth. The Guardian report that concussion grenades and rubber bullets were also alledgedly used in what can only be described as an assault. The subject of the new piece, Cosette, is based on an iconic image from Les Miserables CS Gas, rubber bullets and concussion grenades have reported been used in early January to clear parts of the ‘Jungle’ A nearby QR code links to this video