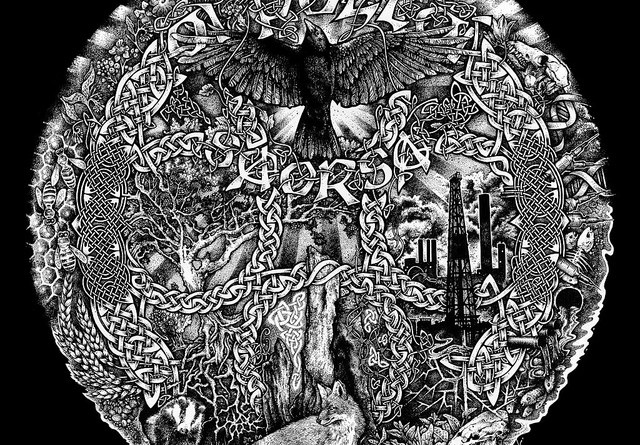 First things first, the artwork by Sonia that adorns the cover of Oi Polloi’s latest and long awaited album Saorsa is stunning. Presented as a fold out mini poster it depicts the wonders of nature and a world of plenty on the left hand side while on the right is a polluted, devastated planet where wildlife has been reduced to merely skulls and bones. And that’s the perfect introduction to Oi Polloi’s politics which are firmly rooted in maintaining and enhancing the vision of the left hand side. Fronted by original singer Deek they have been around long enough to recognise an anarcho punk cliche when they sing one. Two thirds of the way through “Sing A Song Of System” they slow things down to explain that despite writing what they considered the perfect anarcho song they’d missed out key elements. Cue a verse about the Police, Thatcher, nuclear war and animal liberation. I think that’s everything covered, right?

Well no. There is a wealth of great songs on this album, each one memorable in its own right. Kicking off with the shout along ‘Lets Go’ (“Punks and Skins on the street dancing to the rhythm of a prog Oi beat”!)  the follow up ‘Soil Yourself’ turns out to be a plea to get involved in permaculture rather than an ode to a nervous clear out . Great lines all over the place “Hands down in the muck, Monsanto can get to fuck”! its a real route one march against it all. “The Face” concerns itself with Anti Fascist Action, it’s message loud and clear “Nazi bonehead on the street you think you are the master race, but Anti Fascist put you on the deck and they’re kicking you in the face”. Uncompromising yes – especially on the one word lyrics to ‘No’. ‘Dirty Protest’ tackles the reaction of IRA and INLA prisoners to regular prison beatings which escalated over a five year period from ’78 making it too dangerous to leave their cells. The anarcho cliche count takes a hit with songs referencing metal detecting and the Royals, our need to protect the bees ‘Our Winged Sisters’, before ‘Spelling It Out’ closes off things with its phonetic alphabet spelling out of phrases such as ‘Alpha Charlie Alpha Bravo’ and ‘Foxtrot Indigo Golf Hotel Tango, Bravo Aplha, Charlie, Kilo’. You can work those ones out yourself.

Direct, in your face, memorable, treading between both cliched and non cliched, punk and oi with tinges of metal, Oi Polloi have pulled together an album that both reinforces their anarchoi agenda and extends it beyond the obvious. It’ll have you singing its tunes all over the house and on the streets.

Watch ‘The Face’ live at T-Chances: