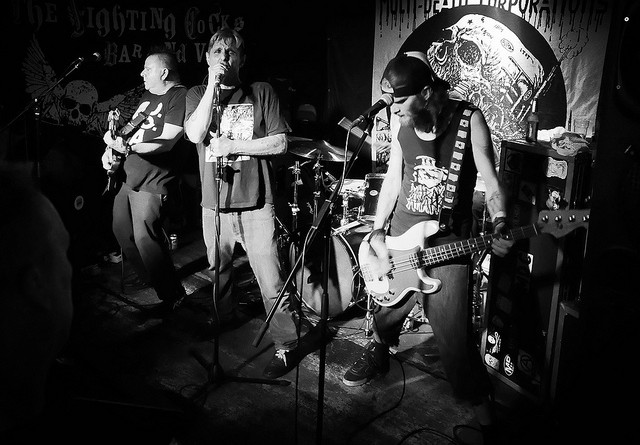 MDC in Kingston, with Maid Of Ace and another band – all for £7? Well that’s a no brainer then.

Having just released their second album ‘Maid In England” Hastings finest all girl all sister band (said like there could be another!) are on a string of dates in the UK and beyond with their raucous riotous sound. Tonight is a typical show with a bunch of abrasive tunes played hard with plenty of drive from Abby behind the kit and Alison, Anna and Amy relentlessly going for it up front. Things come to a juddering halt, however, courtesy of a broken string. Great to see that MDC came to the rescue with a replacement guitar giving enough time for the band to be joined on stage by Dee Skusting of A Pretty Mess on stage for ‘Empty Streets’ before the end of an all too brief set. Flash House are a name new to me but I have a feeling there’s some pedigree behind this unit because they’re on it. They sound to those ears like an early Gang Green mixed in with a few more metal licks. Just like the band before them they break a string too and carry on without a second guitar until Maid Of Ace step in with one of their guitars. Instant karma. Their songs are memorable, fast and furious – great band and its well worth tracking down some of their output like Domestic Hiss on Youtube. MDC must be used to playing in halls much bigger than the Fighting Cocks but its clear they relish little gigs like these too. There’s a real old school collaborative feel about tonights gig with each band checking out and helping out the others – along with a small but enthusiastic crowd. In larger venues MDC’s sound can become a bit lost but here it’s razor sharp, loud  and urgent – it’s easily the best I’ve ever seen them. They play a bunch of classics of course. Included are ‘John Wayne Was a Nazi’, ‘Chicken Squawk’, ‘Corporate Death Burger’ and ‘My Family Is A Little Weird’ all knocked out with the kind of energy that you only get with such a small venue. At the end vocalist Dave Dictor has a massive smile on his face, it looked like he’d had a lot of fun!

MDC at the Fighting Cocks, Kingston