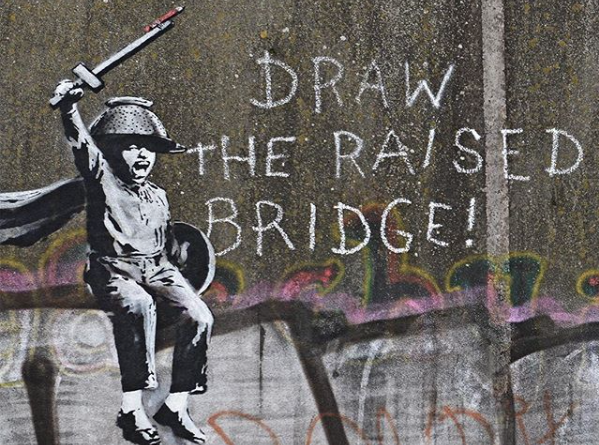 Banksy has just posted these images of a new work in Hull with the description ‘Raise the Drawbridge!’. It’s on the site of an old disused bridge in the UK City of Culture for 2017 and seems to have been completed on around the 25th / 26th January.

The work shows a small boy sitting atop some presumably existing graffiti. He’s dressed up for battle with a steel colander on his head, an improvised shield and a wooden sword with a crayon attached on the end. On the wall is scrawled ‘Draw The raised Bridge’. Banksy’s Instagram as ever reveals little else as to the meaning. Some media outlets have announced it as a comment on Brexit. You can make your own mind up.

Update: Within a couple of days the piece had been defaced and then ‘saved’ by a window cleaner. Despite a member of the council saying it should be removed they’ve now actually taken the very sensible decision of saving what’s left. It’s now got it’s own see through protective cover although it’s not exactly looking at its best.