Banksy Goldfish Room, Camden, London  This one took a while to appear on Banksy’s website but it displayed enough characteristics for most people to think it was by the man. First up those fish have great detail and are stenciled. The ‘chalk drawing’ style has been seen before _ most notably in Boston. It’s also in a place Banksy has hit up before. Oddly, the armchair turned up a couple of days later but is a really nice addition.

Given the history in this spot with Banksy and London graffiti veteran Robbo what could this new piece mean? Well I usually take the Roy Walker Catchphrase route to working it out, i.e. ‘Say What You See’. So I see a goldfish leaping out from his bowl in a comfortable home towards a picture of an idyllic sea. Will he make it or more likely will he hit the wall, flounder around a bit and expire on the floor…. 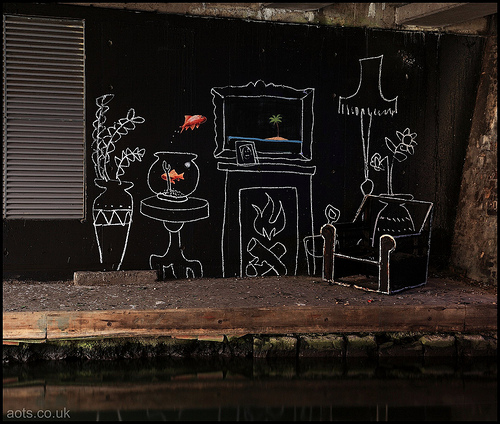