Banksy CND soldiers canvas at the Brian Haw Anti War protest Originally to be found in the Old Street area on a wall the canvas version of this message turned up in Parliament Square in 2005 but was short lived. This one lasted longer and was in place since early 2006 until the Police finally removed it when clearing the site during a night raid.

The painting formed part of Brian Haw’s anti war protest directly opposite Parliament. Brian was a permanent fixture in Parliament Square from June 2001, originally protesting about the sanctions and bombing imposed on Iraq. He widened his protest to include all aspects of the war against terror and escaped the ban on protests in the area because he started in June and the new law stipulates protests starting from August. The law was ultimately redrafted to make sure it is no longer possible to have any demonstration in front of Parliament without permission.

So, as long as the  government (a choice of just three jokers) loosely agree with your protest you can demonstrate (quietly, in small numbers, without disrupting the traffic or being noticed). Democracy in action….

Sadly Brian has passed away but his dedication to peace remains as an inspiration to many.

STATUS: Removed. Airing your views at the seat of democracy will no longer be tolerated in order to keep the place looking nice and tidy for the tourists. 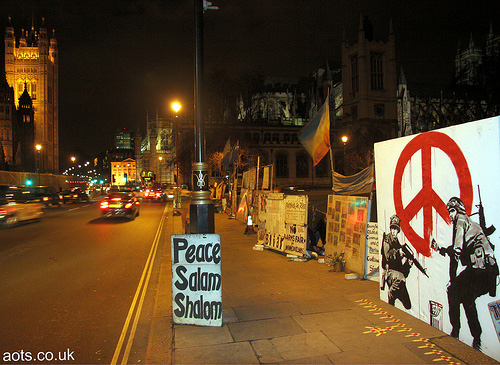