Banksy Child sewing Union Jack bunting.    This child making bunting on an old Singer style sewing machine first appeared on the morning of Monday 14th May 2012 and was rapidly attributed to Banksy. It appeared in the run up to the Diamond Jubilee celebrations for Queen Elizabeth II on the side of a branch of the Poundland chain store. Poundland were quick to distance themselves from commentators accusations that they use child labour to make their products.

As usual these days the piece didn’t last in its original state for too long. The bunting disappeared from the wall and then Perspex was unceremoniously slapped over the top with the screws going right through the painting at its base. 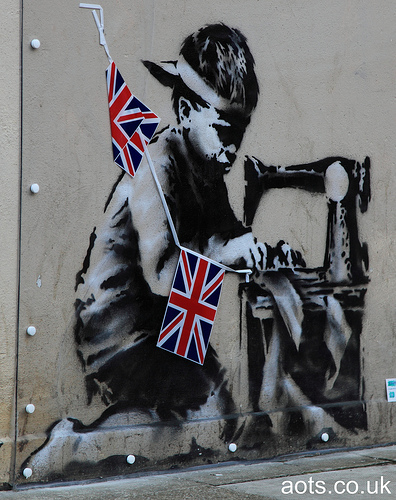