Banksy _ Justice Monument, Clerkenwell Green  The pre event hype had paid off. A large crowd had gathered to see what was underneath the black drapes. What really foxed people was which way the thing was facing. Was it the Statue of Liberty, was it a comment on the torture of Iraqi prisoners? Or was it a load of over hyped crap? Whatever, Diana’s memorial fountain didn’t attract this size of crowd when it was unveiled!

By 7.30pm the crowd had swelled in size and the ‘monument’ was being protected against an impromptu unveiling by three burly guys.

Every unveiling needs a master of ceremonies _ cue MC Dynamite to do the honours:

As the statue was unveiled it became obvious that it was a remodeled version of the figure that sits on top of the British Royal Courts of Justice.

Leaflets were distributed that continued the theme of injustice: "The unveiling marks the anniversary of the death of Kevin Callan. Kevin was famously jailed in 1991 for murdering his girlfriend’s severely handicapped four year old daughter. From his cell in Wakefield High Security Prison he badgered library staff to provide him with an array of medical textbooks and despite being a lorry driver who left school with no formal qualifications he became an expert in child neuropathology. He was able to eventually prove the girl in his care died as a result of a tragic accident and was released unconditionally. Kevin died on the 5th August 2003"

"Clerkenwell Green once housed England’s biggest and busiest courtroom which is now a Masonic Lodge. The green has been home to protest and dissent in London for hundreds of years. It is also near the spot where Banksy feels he was wrongly arrested last year" (from the photocopied leaflet thrown out at the unveiling).

Just on the right of the picture you can see the Ice Cream van that distributed free 99’s and cider to the crowd.

"People like Banksy have got real talent _ they just need use it in a more constructive way" _ Chief inspector Dave Dickason, British Transport Police (source BBC).

Constructive like this? Thanks for the green light Chief Inspector!

Embossed into the back of the statue’s plinth was Banksy’s well known tag. That looks like cast concrete to me, class act.

And on the front of the plinth was a rather posh looking plaque with the words ‘Trust No One’. That’s real spit on there by the way, which along with the word ‘Believe’ being sprayed on the side had appeared within minutes of the statue being unveiled.

The statue is based on the Royal Courts of Justice original with a few additions _ a garter with a dollar bill, thigh length PVC boots, hitched skirt revealing thong and a blindfold. Apparently the whole structure weighs 3.5 tonnes, the statue is cast in bronze and it all stands at 20 feet high. But I didn’t measure any of that.

The statue stood in place for another couple of days before the council craned it out citing the fact that it could make the toilets below the square unsafe. According to the BBC Banksy’s agent has offered to pay the recovery costs to retrieve it. From here who knows where it will turn up next. 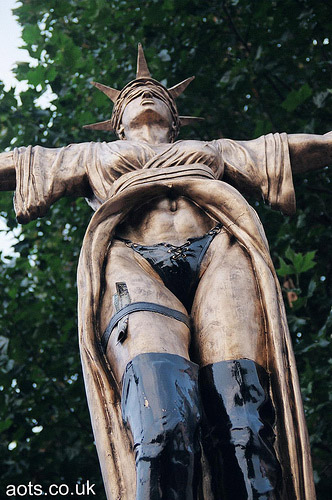 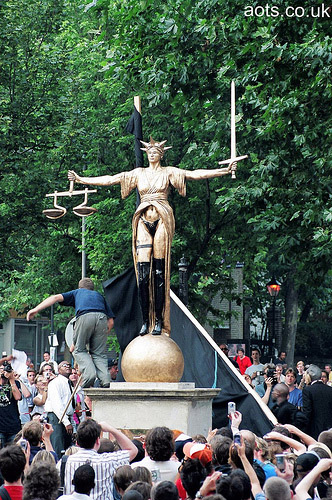 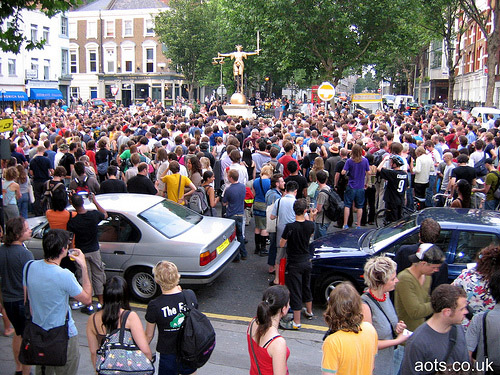 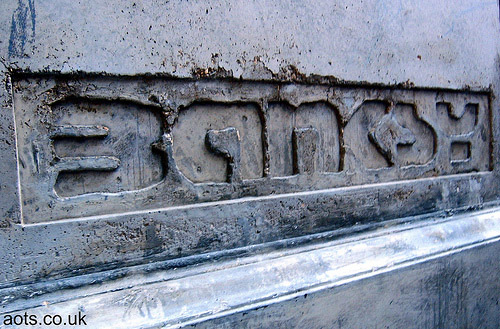 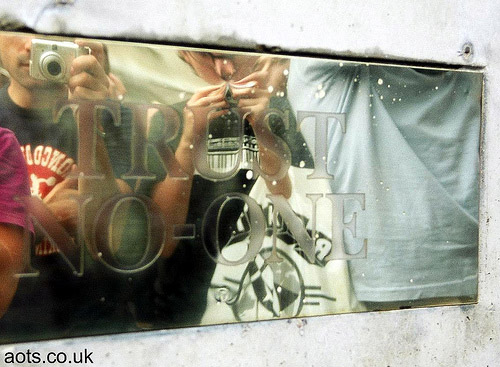