Banksy Turf War, Dalston, London E8 July 18th to 20th, 2003 The location for Banksy’s Turf War was kept secret until just  a day before the event. An email gave an address in Dalston, East London. And all of a sudden half of the East End’s new media community (basically all of those who didn’t go to the party the night before) were off to the venue _ a disused warehouse in Kingsland Road.

I feel obliged to state here for the record:

I don’t work in advertising (or new media). I don’t have a Hoxton Fin nor did I walk about the exhibition talking into my phone saying "Yah, you really should get down here, it’s sooo cool". 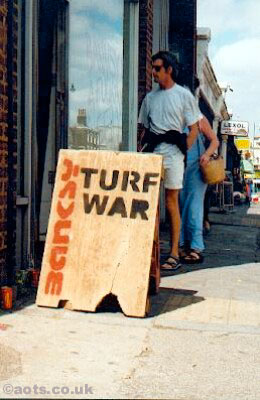