Hurricane Katrina hit New Orleans in August 2005 killing nearly 1700 in the state of Louisiana and displacing around a million inhabitants in the affected areas. Local, state and federal governments were criticised for being to slow to react to the initial damage wreaked with poor planning and an attitude that treated treated the city’s people as if they came from a part of the world other than the richest nation on Earth. Its an attitude that still seems to be in place today judging by the pace of the reconstruction.  These images appeared just prior to the third anniversary of Katrina.

These pictures have been borrowed and cropped from banksy.co.uk where you can see the full size versions. 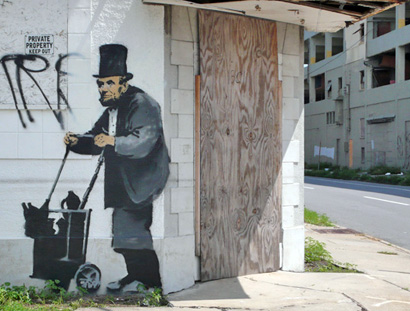